Going back millenia, Erzurum is one of the oldest cities of Anatolia, and the center of cultural and natural richness of the Eastern Anatolian Region. It is Türkiyes highest city. The history of Erzurum is best described by the city's architectural style. Fortifications and the castle of the city recalls the Byzantine rule in the fifth century.

Turkish domination of the city started with the “Manzikert” victory of 1071. Suleiman the Magnificent ceded Erzurum to the Ottoman Empire permanently in his campaign to the east, after which it has always remained a Turkish city.  It played a key role in the resistance started to drive the occupying forces out of Anatolia in the first World War.

Bearing the traces of Mustafa Kemal Atatürk and his staff, the city hosted the Erzurum Congress from July 23 to August 7, 1919.

The famous traveler of the 17th century, Evliya Çelebi, made this remark about his travel to Erzurum: "I spent 11 months and 29 days, and never saw a day of summer there." Characterized by a harsh climate, Erzurum is one of the leading cities in Türkiye when it comes to winter sports.

Palandöken Mountain and its ski resorts are available for skiing for six months of the year, which is one of the longest ski seasons in Türkiye. Having hosted Universiade Winter Games in 2011 and the European Youth Olympics Winter Festival in 2017, the Mountain of Palandöken also offers night skiing opportunity.In addition to modern ski tracks, it has elegant facilities. Palandöken ranked 18th in The New York Times' list of 41 ski resorts.

You can have exciting new experiences and find different beauties in every season in Erzurum. One of the Türkiye's highest waterfalls, Tortum Waterfalls is one of the best symbols of this. Lake Tortum, Fairy Chimneys of Narman, and Seven Lakes of İspir attract the most visitors. 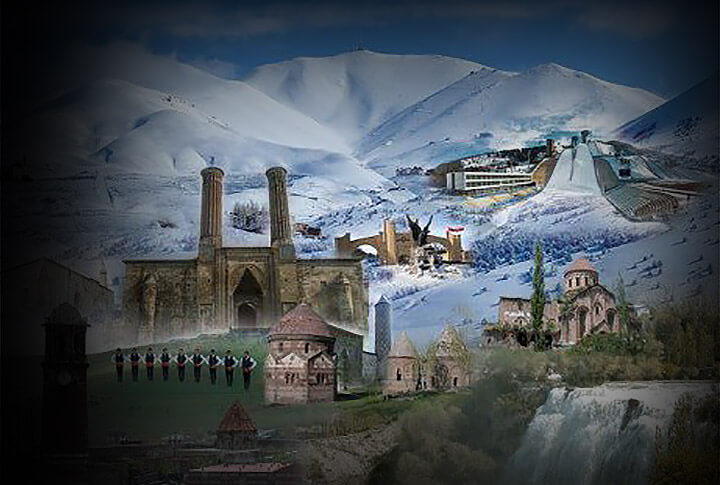